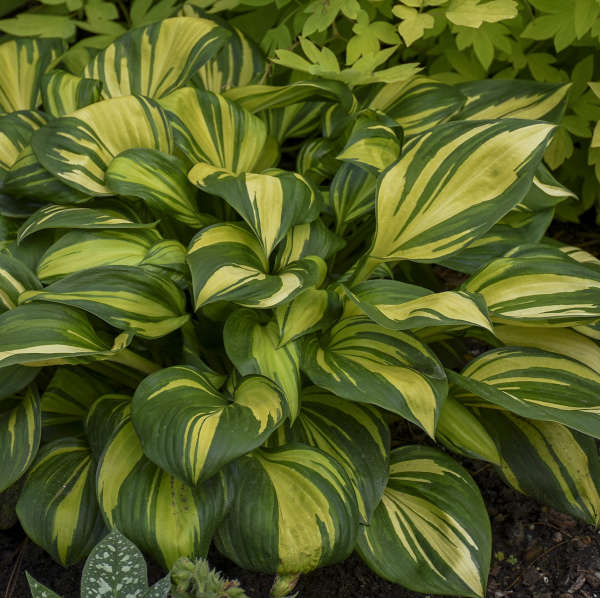 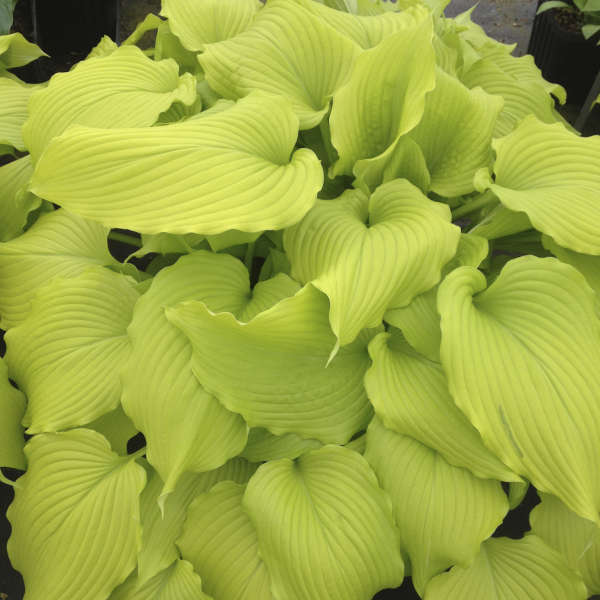 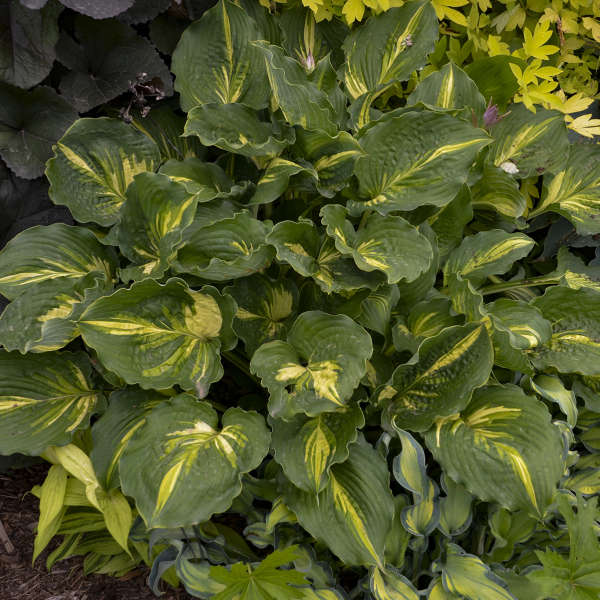 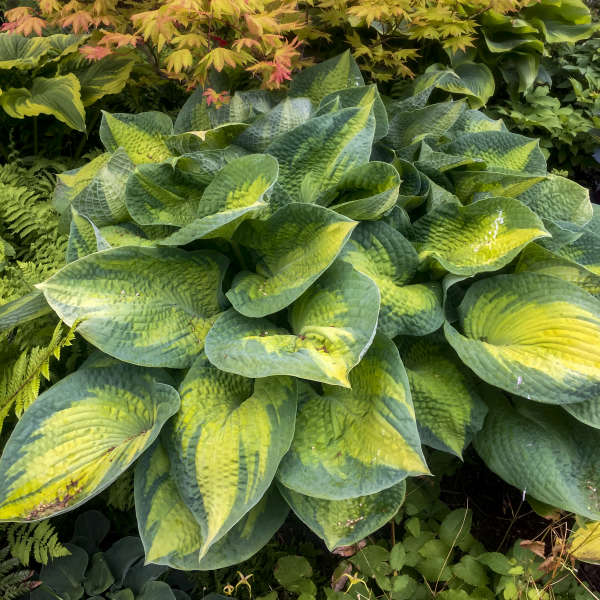 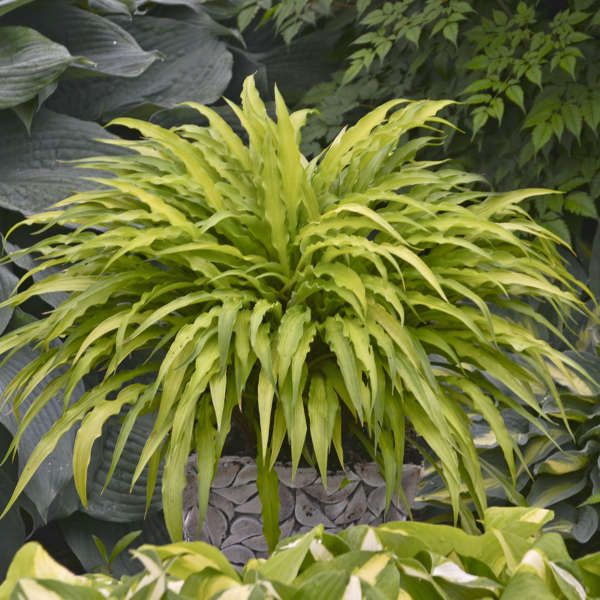 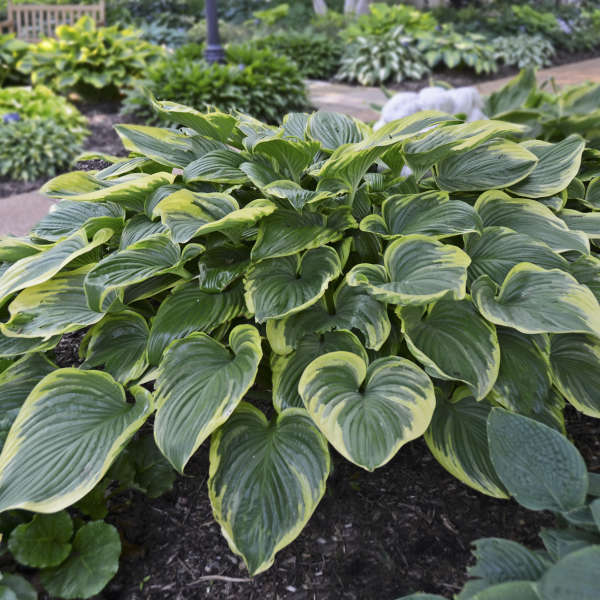 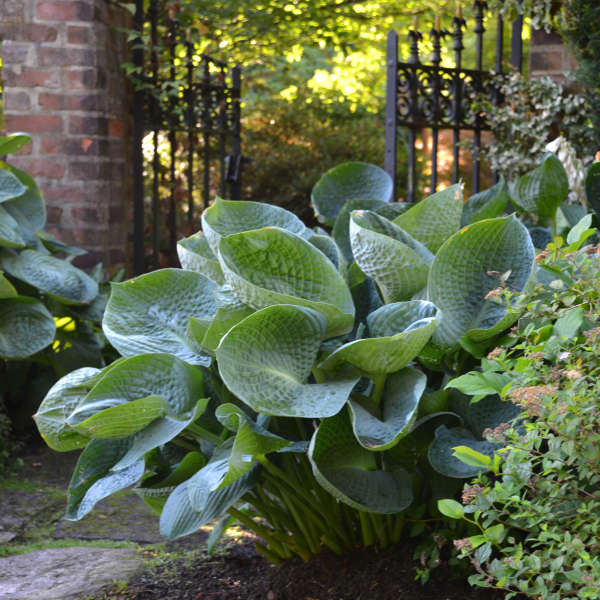 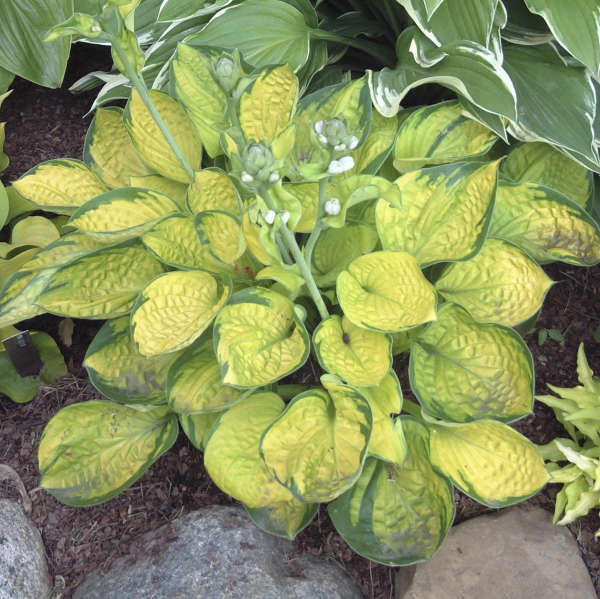 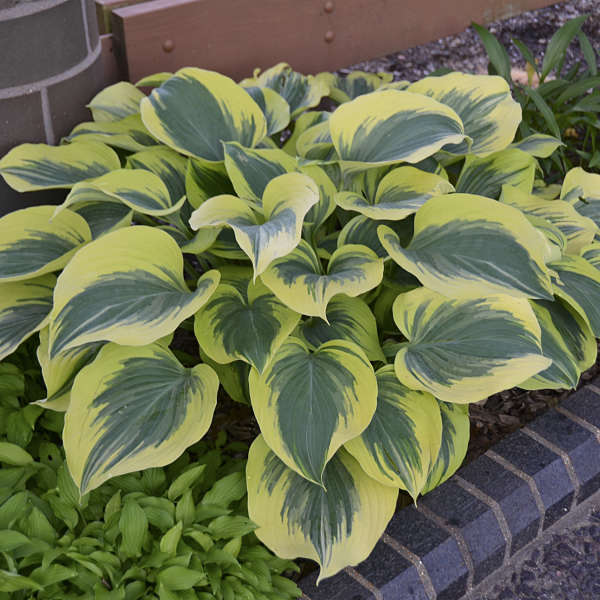 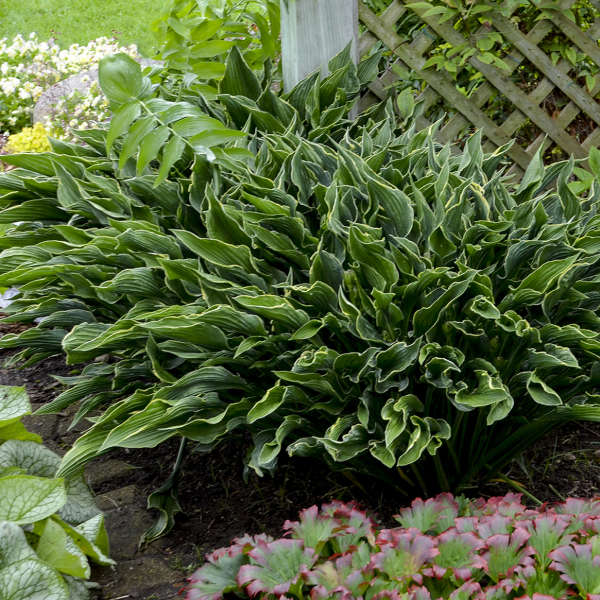 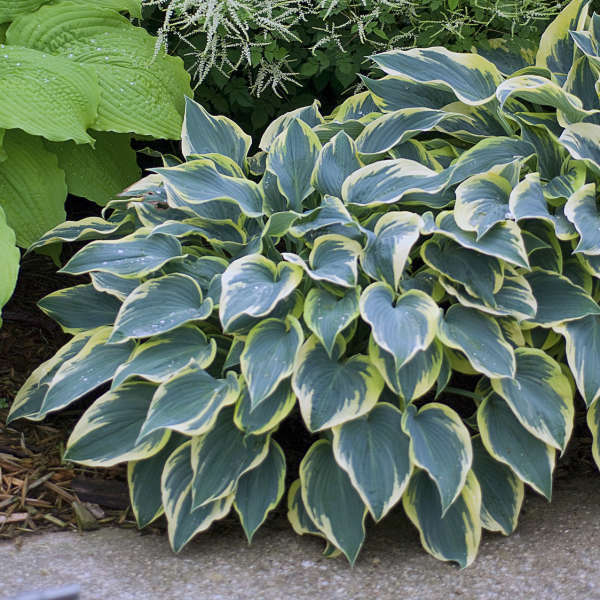 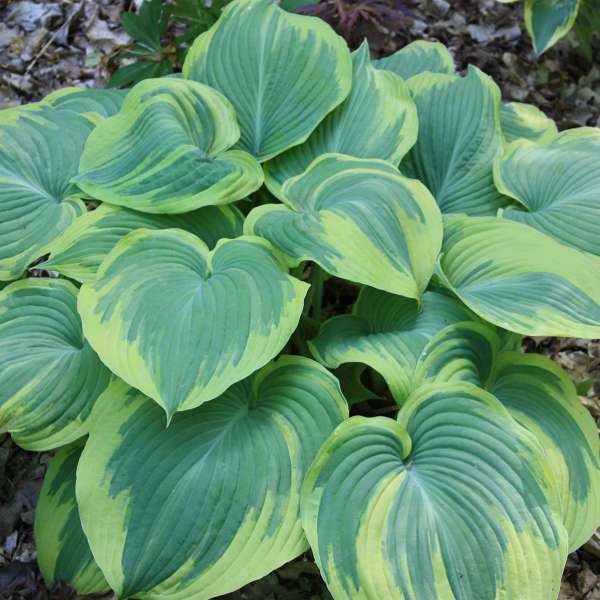 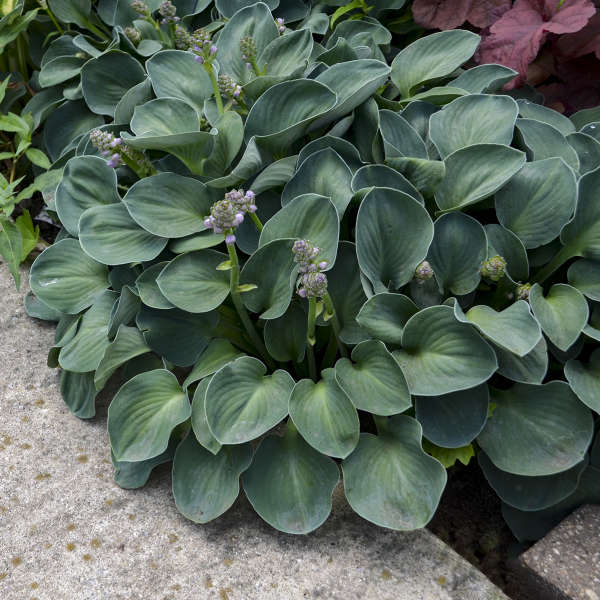 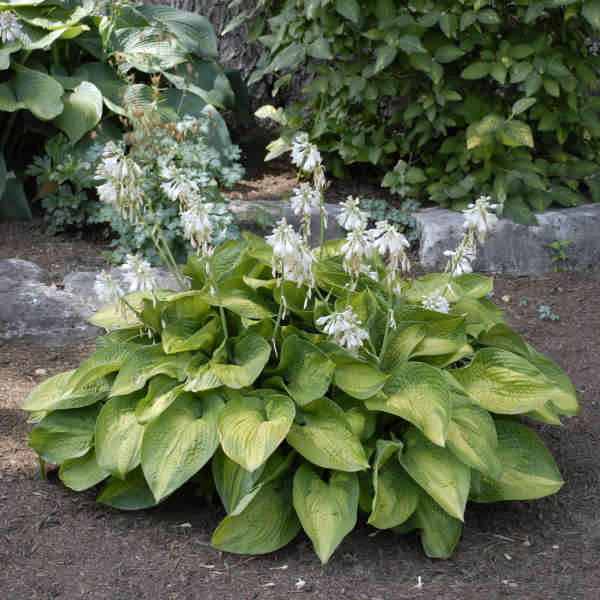 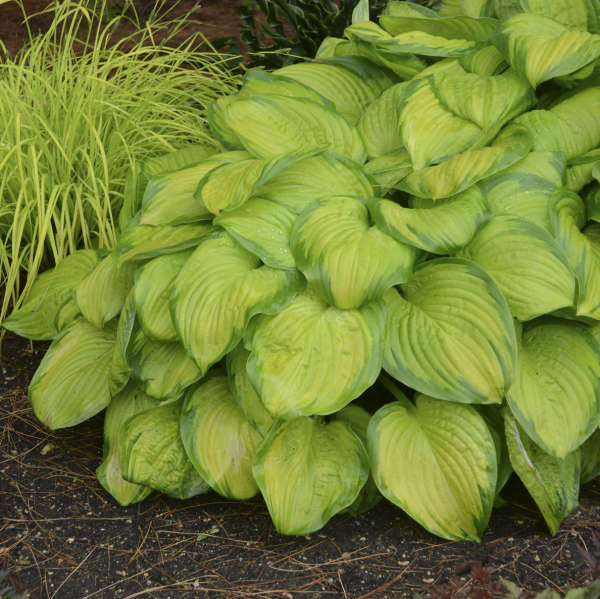 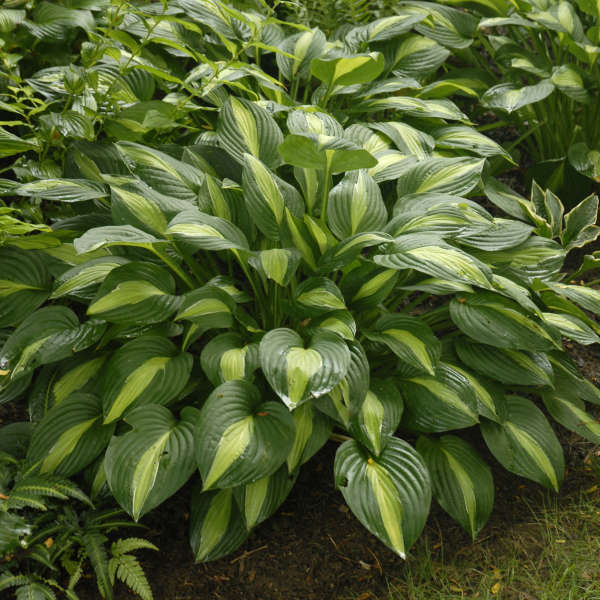 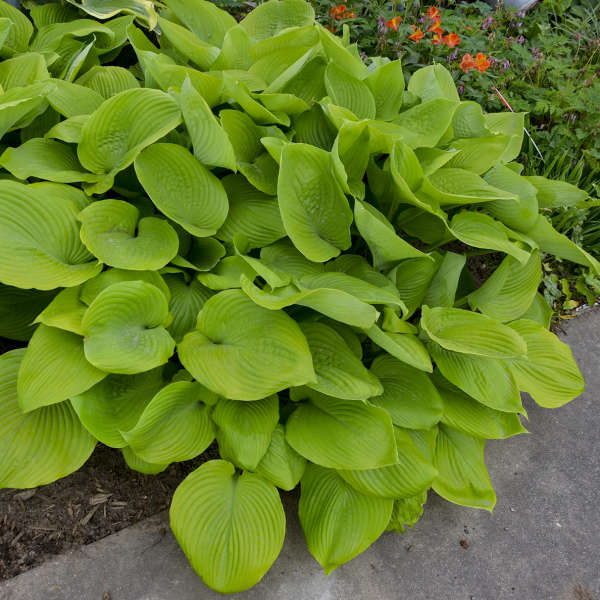 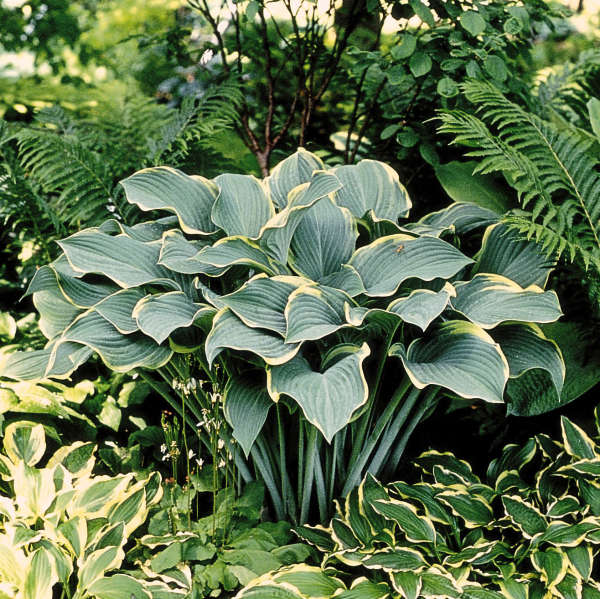 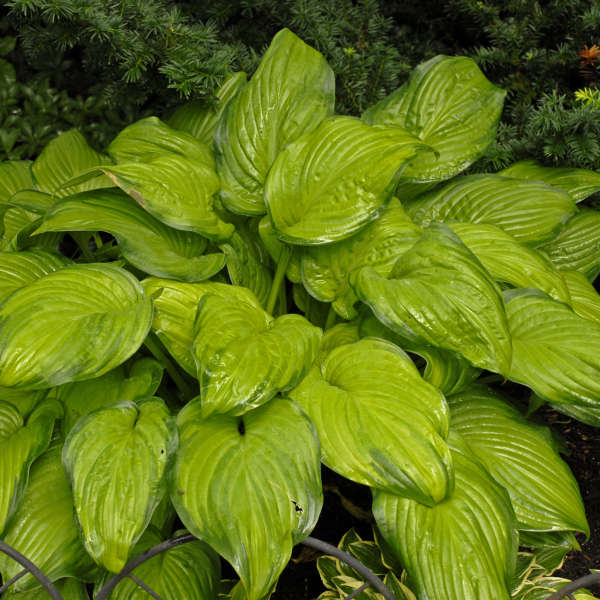 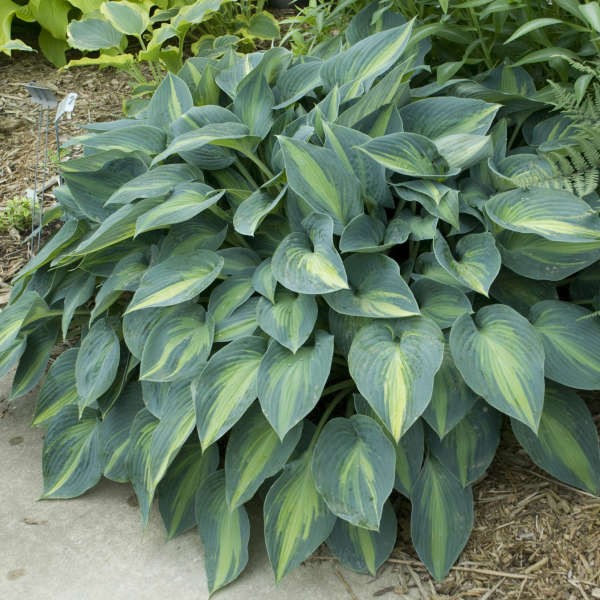 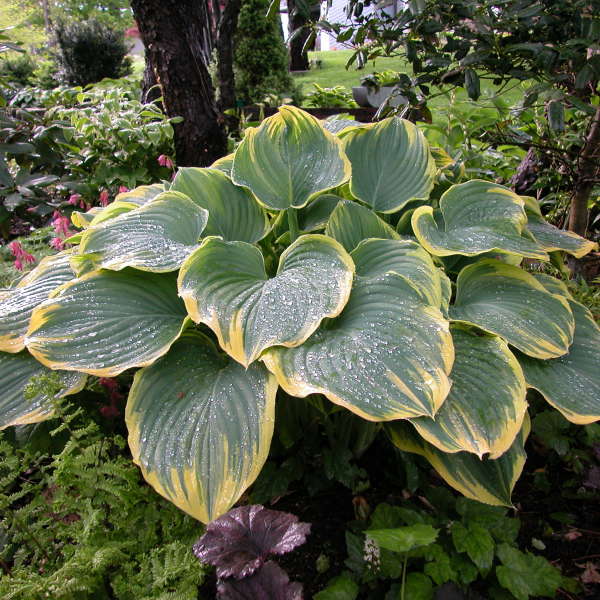 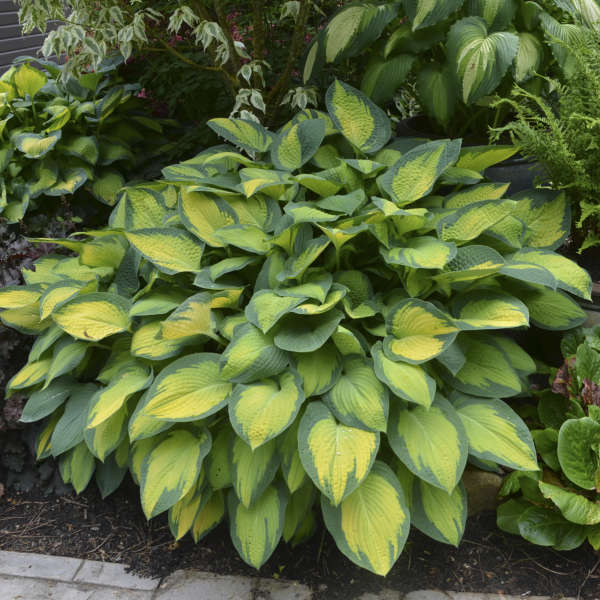 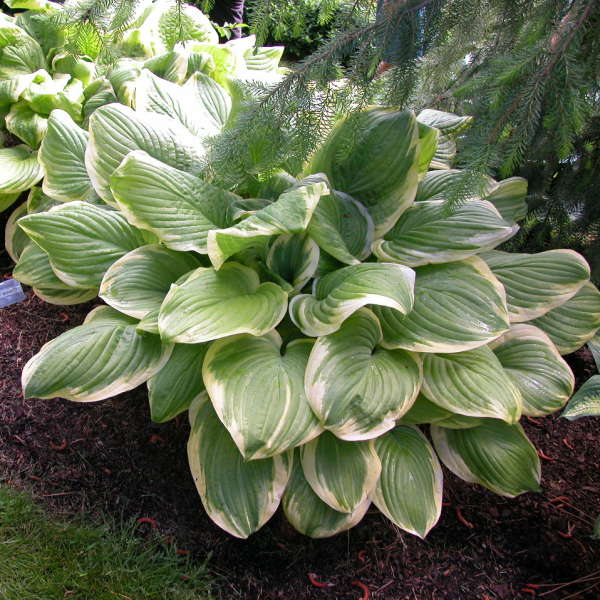 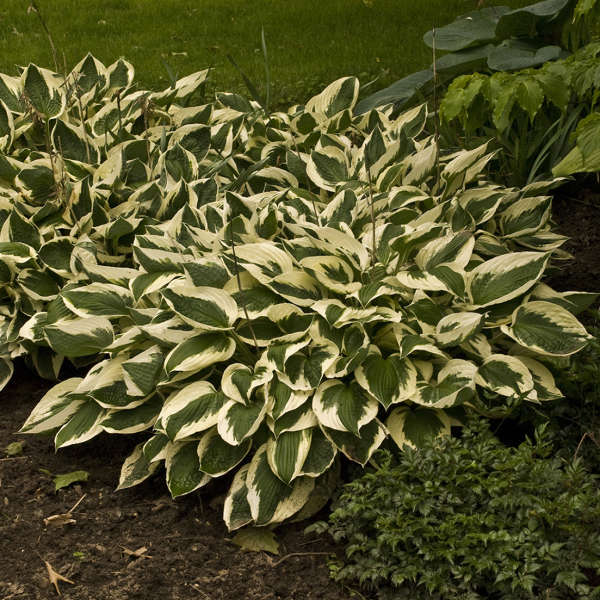 This unique hosta exhibits incredibly variegated, shiny foliage. The bright yellow leaves of good substance have dark green margins that jet into the center, and the center brightens to creamy white in summer. It forms a medium sized mound of attractive foliage in the landscape.

Unlike other yellow hostas which emerge or turn chartreuse, ‘Dancing Queen' emerges bright yellow and remains yellow all season long. The large leaves have a prominent pie crust edge, adding even more pizzazz to this colorful hosta. In mid to late summer, the foliage lightens to soft yellow and the clump is topped with pale lavender flowers. This one is a must-have!

One of the very best hostas to come from Mary Chastain! This stunning hosta produces heart-shaped leaves with very wide, wavy, green margins. The narrow, creamy white markings in the center of the leaves shoot out from the cream colored petioles in a feathery pattern. Its thick substanced leaves make the perfect background for the cream scapes that carry the light lavender flowers in midsummer.

A large sized hosta with a moderate growth rate that is described by many as the most spectacular hosta they have ever seen! Thick, heavily corrugated and puckered leaves are green with a brilliant gold center In spring, the margin may have a waxy coating making it appear more blue, and the center may be more chartreuse. Thick leaves exhibit slug resistance and form a wide, tall clump, making it the perfect focal point for a shade garden. Near-white flowers sit just above the foliage in late spring or early summer.

Want fries with your order? This irresistible miniature to small sized hosta is the perfect accompaniment for bright blue hostas like ‘Prairie Sky', especially when planted together in containers or near the front of the border. It forms an arching, wiggly clump of extremely rippled, narrow leaves. Position this hosta where it will receive morning sun, as its chartreuse foliage will be brightest there. Mature plants will develop red speckled petioles. Lavender flowers top the clump in midsummer.

A mature specimen of the giant Hosta ‘Victory' is a triumphant accomplishment and commands attention in the landscape. Be sure to start this one early to give it plenty of time to mature. Though it has a good growth rate, like most giant hostas it takes some years to develop the huge leaves and distinctive variegation that makes it so special.

A sport of H. 'Maui Buttercups'. Leaves are solid light green when they emerge, then quickly develop dramatic dark green borders and radiant gold centers. They are thick and glossy, holding up well all season, and are also slug resistant. Light lavender flowers are produced on 24 inch scapes in midsummer

A gorgeous sport of H. 'Sagae'. Blue-green leaves have wide, dramatically streaked, yellow margins which fade to creamy-white later in the season. They are of much heavier substance, providing greater slug resistance. Lavender flowers appear on 40 inch scapes from early to midsummer.

Like no other hosta; definately a collector's item. Upright, narrow, tightly folded leaves resemble hands folded in prayer. Dark green leaves are heavily rippled with very narrow, gold margins. Leaves have a matte finish above but are folded, revealing their shiny undersides. Lavender flowers on 18" scapes are abundant in late summer.

A sport of 'Halcyon' with the same intense blue-green leaf center. Emerges with a gold margin early in the spring, then changes to pure white later in the season. The leaves hold up well in the garden all season long until the "first frost". Light lavender flowers appear on 28 inch scapes in midsummer.

Pointy, ovate leaves have sharply contrasting dark green, 2" wide margins and narrow, gold centers; looks like a gold leaf within another leaf. Received its name from the white strip appearing between the dark green margin and gold center. Pale violet flowers appear on 30" scapes in mid to late summer. A sport of H. 'Gold Standard', though it bears little resemblance.

One of the largest hostas available today, with 16", broadly ovate leaves and a huge, mounded form. Leaf color varies with the amount of available sun from light green to chartreuse to gold; prefers 1/4 to 3/4 day of sun. Leaves are of good substance, corrugated, and glossy, giving them good slug resistance.

A sport of H. 'Halcyon'. Pointed, ovate leaves have distinct, beautiful variegation. Leaves have wide, streaked, blue-green margins and chartreuse centers in spring. Leaf center becomes medium to light gold in summer with enough sun exposure, but will remain chartreuse in full shade. Leaves are of heavy substance and are slug-resistant. Pale bluish-lavender flowers appear on 20" scapes in mid to late summer.

A stunning sight! Large, thick, nearly triangular leaves are frosted blue-green. Leaves have wavy, yellow margins which turn creamy-white with more sun. Grey-green streaks are painted in the area between the center and the margin. Forms an impressive semi-upright mound of beautiful, slug-resistant foliage. Large, lavender flowers appear on 38-50" scapes in early to midsummer.

Light apple-green leaves with wide, pale yellow to cream margins. Leaves are broadly ovate, wavy, and of good substance. Slug resistant and a strong grower. Large, near white flowers appear on 36" scapes in midsummer and are very fragrant.

Ovate leaves have dark green centers and outstanding, crisp white, streaked margins (margins are creamy-yellow in spring). Leaves are of better than average substance, are slightly wavy, and display good sun tolerance. Lavender flowers appear on 30" scapes in midsummer. Attracts both hummingbirds and songbirds. A sport of H. 'Francee'.